Fusion and the mule. Rock, Jazz, horses and donkeys.

Fusion and the mule by Marcelo Berestovoy 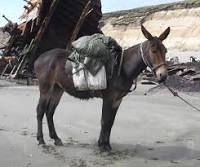 The mule is a good example of how combining two different elements can result in a favorable combo. In the case of the mule, the tenacity of the donkey and friendliness of the horse give you a great working friendly animal. Mules cant’s reproduce, so to get another mule, it is necessary to find another “Jack” (male donkey) and a mare (female horse) to breed.

The first “fusion” of two distinct musical styles I remember (long before I’ve heard the word “Fusion” used to describe a musical style) was the Beatles mixing elements of Indian music in their songs. Later I discovered Return to Forever, Miles Davis and Paco de Lucía mixing Jazz with Flamenco and African rhythms. During the 1970’s, other artists dared to create interesting pieces of music that combined elements from different parts of the world, but somewhere down the line, something went wrong. A freak of nature driven by ignorance and ego broke an important rule of life: F1 hybrids are not supposed to reproduce!

For some people (or most!) is not that easy to identify which elements of what styles are being combined. Many people, while listening for example to Di Meola/De Lucía/ Mc Laughlin may object: “I don’t understand why they call this Jazz” or “This is not flamenco”. So, let me explain using a well known song as an example. “Mediterranean Sundance” by Al Di Meola and Paco de Lucía. In this piece, the elements  of Flamenco are found in the Rhythm (Rhumba), the chord progression (Based on the Andalusian cadence) and the melody, while Jazz is present in the melodic improvisation over the chord changes.

So, what about the mule? In the years after some of this amazing musicians created this styles combining elements later to be called “fusion”, many young up and coming musicians and music fans became interested in exploring this style known as “Fusion”. By the late 70’s early 80’s, the style previously known as Jazz Rock became “Fusion”. So, what’s the problem? Remember, the mule does not reproduce? So, if you love your mule and you want another one, you’ll need to find a good “Jack” and a “Mere”. The problem is that people that only knew fusion started creating more fusion, based in elements they’ve already heard in fusion. In time, people that called themselves “Fusion musicians” and grew up listening to this first generation of fusion, created new music that very quickly lost all the interesting elements that it originally had and quickly became a boring sequence of chords with no real theme or melody over a funky rhythm with an egomaniac complaining about the stupidity of the audience not being impressed by the endless stream of notes being played over E7(#9), perhaps the most common “Fusion Jam” of all times. Even though most will not admit it, in a lot of so called Fusion, the song is just an excuse to get to the solos but wait a minute! Solos were supposed to be variations of the theme and there’s no theme, therefor, I conclude that this improvised solos are a variation of nothing.
Fusion can still be a wonderful thing if you are willing (and capable) of combining interesting elements from different styles of music so, if you like the idea of fusion, go to the sources. This of course does not mean that styles that are born from different combinations of music can’t grow into a new style and grow and be developed, in fact, many did! here are some examples to put this in practical terms for reference.1) Blues: Originally combined Negro Spiritual (traces back to Africa) and European Folk. 2) Rumba Flamenco: most people don’t realize that the most popular flamenco songs (Rumbas) are actually a fusion of Flamenco with African music picked up by Flamenco musicians in their travels to the American continent. 3) Gypsy Jazz: combines the swing and improv of jazz with some of the melodic elements of Gypsy folk traditional music. 4) South American folk: a combo of European waltzes (3/4) and African rhythms (6/8). 5) Rock: originally Blues+Rhythm and Blues and Country and later combined with many other elements that gave place to sub-genre like Folk Rock, Pop Rock, Progressive Rock, etc. 5) Bossa Nova: A Brazilian style that developed in the 60’s over the bases of traditional Brazilian music (Samba) heavily influenced by Jazz in the use of complex extended and altered chords and lyrically influenced by folk singers of that decade (like Bob Dylan).

So remember, the mule, although a very efficient animal that served a purpose does not reproduce. In my opinion, Fusion shouldn’t have either, at least, not by inbreeding with itself