Your amp is too big!

When your amp is too big you’ll have a hard time finding your desired tone!

Buying gear you don’t really need and can’t use is one of the most common mistakes music aficionados (and even some semi pros) make. The most typical scenario is a guitar player who plays only in his home and buys a 50/100 watt tube head because he read somewhere his idol uses that amp and he thinks that’s the way to get the desired tone from his guitar. What he forgot (yes, “he”, because man seem to be more stupid that woman when it comes to this issue) is that his idol plays at Madison Square Garden and he doesn’t even have a gig yet!

When your amp is too big for your needs,  you set the volume to 4 and you’re too loud.

Your windows vibrate and your family and neighbors hate you. Then you turn way down to 1 or 0.5 and the notes don’t sustain at all. So you go and get an overdrive or distortion pedal (still unsure of the difference) thinking that will solve your problem. Now it sounds like an agonizing mosquito…. Do you know why? Your amp is too big!

If you play in a small environment you need an amp that you can turn up to overdrive itself, even if you’ll add pedals to it later. You can play most rehearsals and bar gigs with a 15 watt amp like a Vox Ac15 or a Fender Blues Jr. At a small bar gig with a classic rock/blues band I turned my Blues Jr to about 5 and then used pedal to push it further into overdrive/distortion.

You need an amp you can push and play with the volume set at 5, at least, to overdrive the tubes.

In any case, when you finally get a gig, all you’ll hear from the sound guy will be: “The guitar is too loud, turn it down on stage and I’ll turn you up in the PA. Which is crazy…The Beatles didn’t do that! They turned up the Vox Ac30’s, sang through the PA and rocked “The Cavern”. By the way, that same sound man, if doing sound for a known guitar player, will NEVER ask him to turn down onstage. For him, he will lower the gain in the guitar channel on the PA and put just a glare of guitar in the mix, letting the main sound be in the room from the amp. An option he didn’t offer you just because he’s an idiot!

A guy at a bike ride event we played with the King James Band for a pediatric association that specializes in brain tumors that was taking photos by mistake captured a few notes on video. That’s the Les Paul straight into the amp outdoors. It filled that parking lot with sound!

Don’t buy an amp that is too big for your needs. Look at the amp as another instrument and not just a piece of equipment to get the sound louder. Learn to play with your amp! Understanding how to get tone from the amp and guitar is essential to a “plugged inn” guitar player of any style. Wether you’re looking to get a sound to play rock, blues, clean Jazz tones and even Acoustic and Spanish nylon string guitars, learn about how sound works and how you can manipulate it to suit your needs. 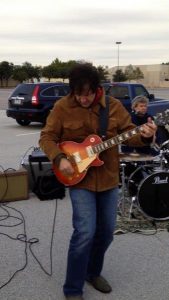 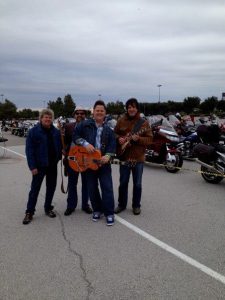 Have questions about this or other music related subject?